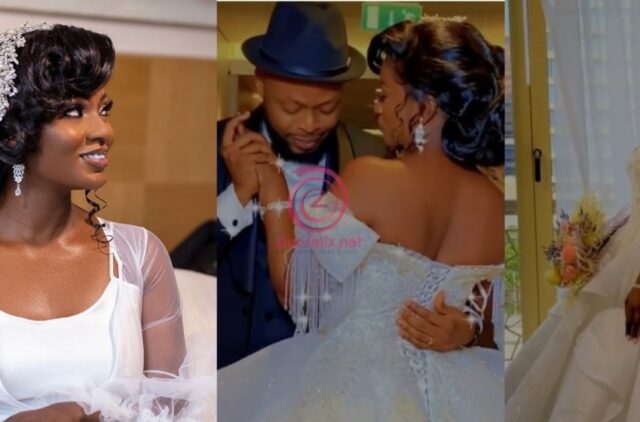 Following their supposed marriage over the weekend, popular Ghanaian actress/model/brand influencer, Priscilla Opuku Agyeman aka Ahouf3 Patri has shared some professionally taken photos of herself online to the admiration of social media users.

Even though a lot of the folks on social media are still casting doubt as to whether the supposed marriage between Ahouf3 Patri and her best friend, Kalybos was real, the former is trying so hard to make them believe she is truly married to him.

Taking to her Instagram page amid all the reaction to their ‘wedding’ video, Ahouf3 Patri dropped two nice photos of herself sitting like a queen who is ready to speak to her subject.

The two photos have her looking so pretty and elegant ahead of the supposed ceremony which was more or less attended by literally no one in the entertainment industry.

ALSO READ #Euro2020Final: It Ends In Tears For Ghanaian Young Man Who Placed A GH¢70,000 Beat On Italy’s Straight Win Against England – See His Reaction

See the nice photos below. Mind you, already a lot of people have said that these photos are probably from a movie or a music clip