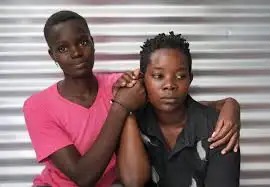 With a lot of controversies surrounding LGBTQ because our country frowns on it.The mention of it and its activities raises alot of eye brows for the people of this country.

News coming in indicates that, 2 alleged lesbians have been caught on their way to getting married.This happend in kwahu in the eastern region of Ghana.

According to Afia Pokua a reporter from Radio 1.This was what she had to say, she revealed that it was alleged in the vicinity that a ceremony of that sort was about to take place.But it has also been made for people to believed that, it is just a birthday party.

To satisfy the curiosity and doubts of people in the community, a few people decided to attend.The birthday girl came out and she was dressed in a wedding gown with a veil on.And this was what confirmed to what was going round.

The police were alerted and the said lesbians have been invited for investigation.There were 22 in all, 7 males and 15 females.According to reports the alleged lesbian in the veil is the wife of a very renowed health worker and the other alleged lesbian from takoradi.Both alleged lesbians are of the view that, it is just a birthday birthday ceremony and not what people are speculating.So the police have asked for their birth Certificate to help in the investigation.