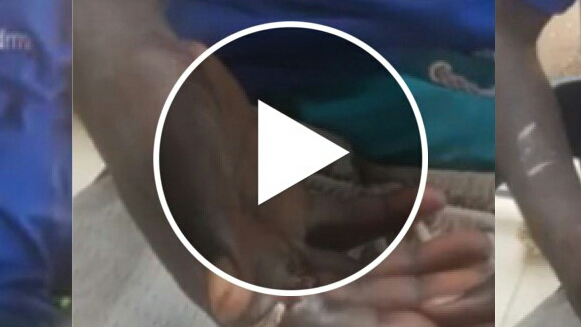 After stealing a ring from a jewelry vendor, Seth Omari Boateng, a teenager from Pantang, has a swollen and rotten finger.

According to Adom FM, the distressed young man, identified as Seth Omari Boateng, told Adom News that a ring he stole about a week ago is proscribed.

Seth described how he went to a jewelry store to buy a chain he had been sent for, but when he saw the silver ring, he stole it.

Seth admitted that he didn’t have enough money to buy the ring, so he stole it and hid it inside a cloth on the seller’s backside.

He attributed the theft to greed, adding that for over a week now, the ring has been unable to come off as it keeps eating into his flesh.
A Beninois spiritualist who was contacted for help is said to have diagnosed the ring as one made for spiritual sale.

He blamed the robbery on greed, adding that the ring has been unable to come off for over a week because it is eating into his flesh.
The ring was diagnosed as one made for spiritual sale by a Beninois spiritualist who was approached for assistance.

see the video below