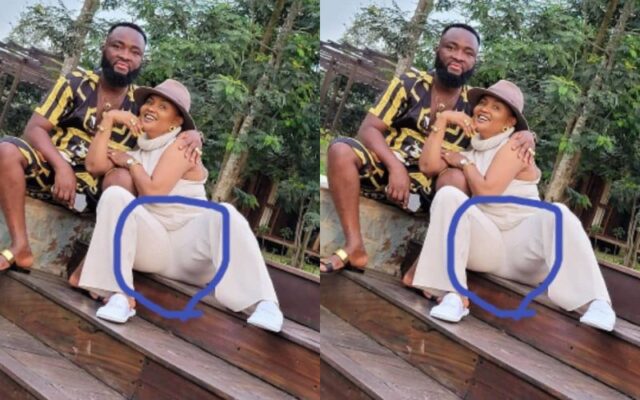 In recent times having big backside and hips is a new norm and many women try as hard as possible to fit in including those lacking it.

Usually some women who lack it but a re rich go under the knife to have a surgery done or other times a liposuction. Celebrities like Moesha Boduong, Yaa Jackson, Salma Mumin, Tonto Dikeh and many others have had their lower bodies artefically enhanced.

One person who usually gets busted for wearing hip pad is Kumawood actress Benedicta Gafah but it seems she has an accomplice now as actress Nana Ama Mcbrown got busted too.

In a new photo sighted online, Mcbrown and her husband stepped out for the Easter celebration. In the photo sighted Mcbrown sat in front of her husband on something that looked like a wooden platform. As she sat down she raised one of her leg a bit which made it possible for an image of what she wore underneath to be glaring at fans.

Her under garment seems to have divided something in bits and it looked as if it wasn’t her flesh. Fans have blasted her for joining the crowd.