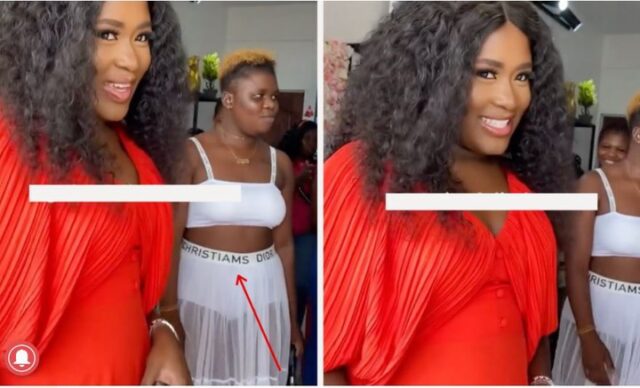 A lady who’s most likely a friend of actress Fella Makafui has been spotted by the lenses of bloggers wearing a fake designer dress to the launch of Fella’s new shop.

On a normal day, we would let it slide without making a big deal out of it, but being a friend of Fella Makafui and attending the launch of a shop that sells clothes, perception really matters.

If you watch the video we’ve attached below closely, you would spot the lady in white wearing a “Christiams Dior”  see-through white dress in Fella’s new shop.

I mean when it comes to buying dresses, if you are not going to get the original of a popular fashion brand, it’s best to stay away unless of course you do not care about what people say or think.

Christian Dior is a big fashion brand so it’s ridiculous to see such a young lady walking around wearing some ‘Christiams Dior’ and walking about proudly in it.

It’s two things–She’s either creating an impression that, Fella sells some “Christiams Dior” or that she’s there to get herself some original clothes.

Hey, this is just for laughs, no hard feelings yh. —-LOL 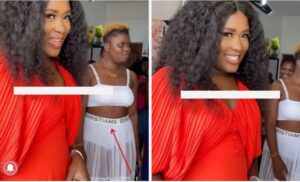