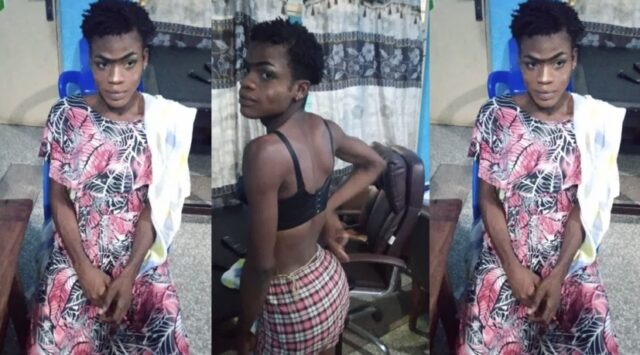 Patrick Jobe Asramah a young man who chose to dress like a lady to wait for his client for sexual bouts at Oyarifa a suburb of AAdenta(Accra) has been busted by Oyarifa Police multiple report says.

The suspect has been handed over to the Adenta divisional Domestic Violence and Victim Support Unit DOVVSU for his “preparation to commit crime to wit” un-natural carnal knowledge of a man on 10th March 2021.

According to Police, a local at Madina named Ibrahim Bawah, led a Police Patrol team to arrest Jobe Asramah.

Ibrahim narrated that he met Patrick on a hot afternoon dressed like a woman.

When he questioned him further, Patrick revealed he was waiting for a client who is a gay to pick him up for sexual pleasure.

This alarmed Bawah who reported the matter to the police around for Patrick Jobe Asramah to be ultimately arrested.

Ghana was rocked with issues of LGBT in the last couple of days with opinions still divided on whether or not the action should be legalized.