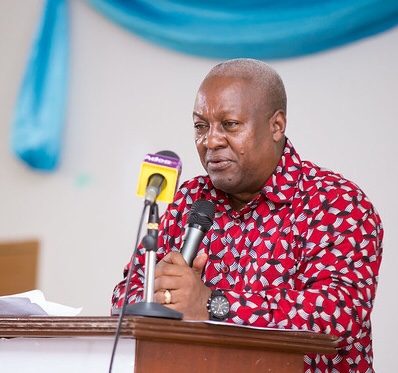 The musician behind John Mahama’s 2020 campaign song though not official Mahama Afa Kojo Bee known to his relatives as Kojo Badu, an Obuasi based rapper has said he regrets composing and releasing the campaign song because of threats he is receiving from people.

ALSO READ Shatta Wale To Compose An Anthem For Kumerica

“I am a musician and not an NDC member. I have been in the industry for fifteen years now. But after dropping “Mahama Afa”, it has really exposed me to a lot of people that I never dream of meeting in my life. But I regret because I am also receiving lots of threats and being insulted. I can’t move freely in Obuasi now and I am not happy” he lamented.

According to him in an interview with Sammy Flex TV on Showbiz Daily, he said he got the inspiration from the fact that this government has failed on it’s promises to the people of Ghana.

“I composed this song based on the recent happenings in the country. Before NPP came to power, Nana Addo came to Obuasi to make promises to make small scale mining (galamsay) better but he failed us. He rather came to burn excavators and denied us our source of daily bread. And this is what my brothers were making money from to support my music. So we believed in his promises but he disappointed us. I have seen videos of people’s excavators being burnt even though I wasn’t there. So this is what motivated me to compose this song as an artiste for the NDC” he explained.

The 23 year old rapper said he has worked as a small scale miner before and was making good money but since this government took over, he has lost his job. He said he has met former president John Dramani Mahama and talks are still ongoing to get a video done for the song.

When asked about his safety knowing he lives in an environment that is dominated by the New Patriotic Party, he said he currently has no happiness because of this particular song. He said there are currently some places he can’t even go again in Obuasi because of the song.

“One night, I went out around 9PM to buy something with my senior brother and an ash salon car with no registration number plate came to pass by us. My brother noticed the danger and asked me to run. Later, he told me two guys from the car approached him to ask about my where about. They later drove off when they didn’t see me. These are people we don’t know in the area. So I got scared and stayed indoors the whole day” he said.

He added: “Sometimes when I’m going out, I have to disguise myself before stepping out. My friends call to warn me about areas I shouldn’t pass. Right now I am not happy living in Obuasi. I am receiving lots of insults because of this song”. He said he has reported this to leaders of the NDC party and they have assured him of a place in Accra after shooting his video for the “Mahama Afa” song”.

“My life is important to me. First, I could walk freely in Obuasi but now I can’t. This is very serious to me. I want them to get me a safe place to stay first. That is what I will need from them for now” he stated.