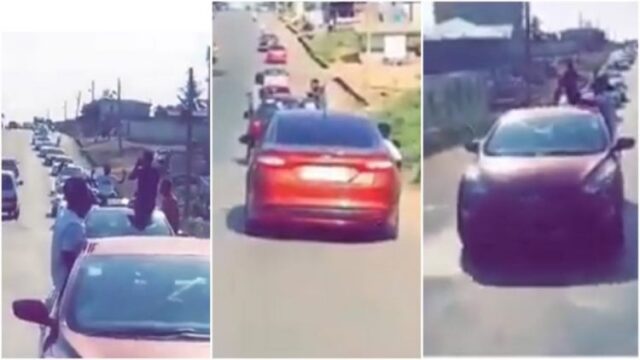 video of some alleged sakawa boys driving a convoy of luxury cars at Offinso in the Ashanti Region while bragging that “if you can’t drink blood, you can’t be like us” has generated concerns.

The paramount chief of Offinso in the Ashanti region has charged the police to devise a means to tackle the disturbing practice of money rituals and alleged associated killings in the municipality.

Residents are living in fear following the missing of some two people, one of whom was a 4-year-old girl who was later found killed.

The calls for urgent action against the canker of money rituals popularly known as Sakawa in Offinso follows a viral video circulating online which shows a group of young men driving a convoy of luxury cars while bragging that “if you can’t drink blood you can’t be like us”.

According to residents, the trend of young men buying luxury cars when the source of their wealth cannot be ascertained has become the order of the day in Offinso. They said some of them are seen moving naked while carrying caskets at night.

They expressed worry about the lost glory of Offinso which used to be a peaceful municipality with a good reputation.

Nana Yaw Kobia Amenfi, the senior linguist to the paramount chief of Offinso told Joy News’s Erastus Asare Donkor that the traditional authorities have met with their security counterparts and other stakeholders to figure out a solution to the insecurity in the area.

Police are reported to have said that it would be difficult to arrest the young men with luxury cars without any evidence that they are responsible for the murders and the missing people. They have however increased visibility in the municipality.