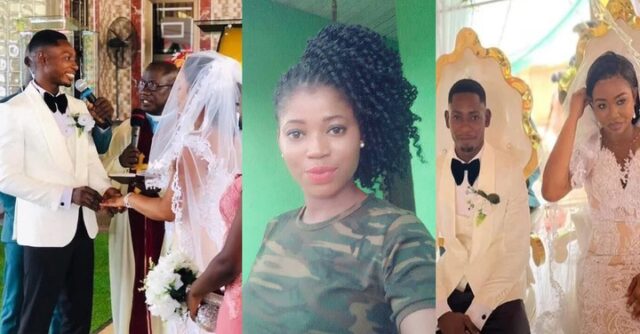 Comfort Bliss, the embattled Girlfriend of Richard Agu has spoken again. According to Comfort, her ex-soldier boyfriend has defrauded her and must pay back all her monies.

She indicates that Richard Agu took advantage of the love they shared and squandered all her noodles money.

According to Comfort who was speaking in a telephone interview with Kofi Adoma Nwanwani, Richard Agu was a mere SHS leaver with no hope of continuing his education.

Comfort adds that she was managing a popular noodles business in one of university campuses in the country.

Comforts adds that the business was good and she was able to save a lot of money to further her education until Richard Agu came into her life.

Out of love, Comfort says she decided to spend her savings on Richard Agu to enable him go through the military training. However Richard started giving her attitude until their relationship hit the rock.

She says it was in the evening of September 24th in 2017 when Richard Agu came to park all his belongings from her room.

“Richard passed out in 2017. And in September 24th, he came to my house to park all his bags, when I had done nothing wrong to him. I will never forget that day. He realized I was a mere noodles seller and did not want to pay back the money. He was selfish because he wanted to spend his money alone without helping me through school. I’m not sad that he left me because I have moved on. He has called him one on one and he has apologized”. She noted.

She further added that Richard Agu has accepted to meet her on Monday for them to iron out the issue. She says if Richards refuses to honor his promise, she will sue him.

“He has promised to come and see me on Monday and pay all back my money. I have recordings of all his dealings and if he should fail, I will release all the tape and he will lose his Job. He has admitted to owing me the money. The wife is innocent, when the guy was duping me the wife was nowhere to be found. I wanted to stop everything but I decided to take the money for the orphanage”. She noted.