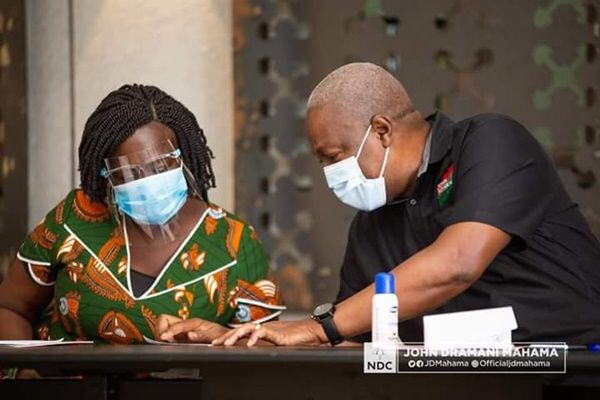 The Flagbearer of the National Democratic Congress (NDC), John Dramani Mahama, will formally out-door his Running Mate, Professor Naana Jane Opoku- Agyemang, at a ceremony in Accra on Monday.

On the official website of the NDC Flagbearer, www.johnmahama.org, the former President indicated that the ceremony will be held in the company of one hundred people in accordance withe the COVID-19 protocols.

The former President on 6th July, 2020 announced Professor Opoku-Agyemang as his Running Mate for the December general elections.

Professor Opoku-Agyemang, a distinguished and respected academic, becomes the first female Running Mate on the ticket of a major political party in Ghana. She is also the first female Vice Chancellor of a public university in the country and the immediate past Minister for Education.

She is credited with pursuing a healthy mix of innovative policy initiatives, quality outcomes and massive infrastructural development during her tenure as Minister for Education.

The formal outdooring of Professor Opoku-Agyemang will allow her to make her maiden policy statement since her announcement as Running Mate.

In accordance with COVID-19 protocols, about one hundred (100) people drawn from a wide array of groupings are expected to attend the ceremony, which will broadcast live on radio and television networks across the country.

Members and supporters of NDC and the general public are encouraged to follow the live broadcast of the ceremony from 6.45pm on Monday 27th July, 2020.

The event, with the hashtag #JMandJane2020, will also be live-streamed on a number of social media platforms.