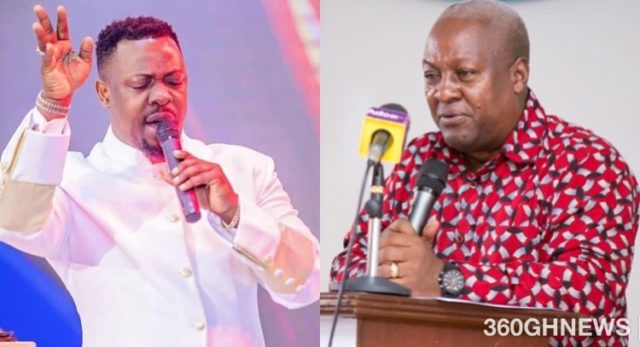 Prophet Nigel Gaisie has set the ball rolling on who will win the 2020 presidential election which will take place on 7 December 2020.

ALSO READ Shatta Wale To Compose An Anthem For Kumerica

Apparently, Nigel Gaisie has a lot of allegations he needs to clear himself but it seems like putting his prophecies out is much important to him.

Well, in his Facebook post we came cross on Wednesday evening Nigel Gaisie stated clearly that the leader for the New Democratic Congress (NDC) John Mahama will be crown the president of the Republic of Ghana in this coming 2020 election.

In the post Nigel Gaisie stated that, the Lord appeared to him his dream and carried him away in the spirit and he was a chief of staff of a ruling party coming to him with a heavy load on her head and suddenly a mortal entity came to distract her and it dragged her into the darkness again.

He added that, he then heard a voice saying that John Mahama will become the next president of Ghana.

“Nigel Gaisie 4 hours ago The Lord Appeard to me and carried me away in the spirit, in the spirit I saw a **CHIEF OF STAFF*** of a ruling party coming to me with a heavy load on her head!Suddenly,a mortal entity came to distract her and SHE WENT BACK INTO THE DARK…I THEN HEARD A LOUD VOICE IN MY RIGHT EARS SAYING….JOHN MAMAHA WILL BE THE NEXT PRESIDENT OF THE REPUBLIC OF GHANA…

1. I saw a SERIOUS ATTACK ON A VICE RUNNING MATE,let them PRAY…

3.1 saw a hatched plan against my person and my church thus they will CRASH MY CAR AND KILL ME BECAUSE,I HAVE BECOME TORN IN THEIR FLESH BUT BE ASSURED THE LORD SEETH ALL THINGS AHEAD OF THEM AND REVEALS IT TO HIS Servants.

4.1 saw an attack on Bukina Faso 5.1 sense a GREAT WIND BLOW ON THE NATION OF AMERICA See you tonight at church @15greenhill Street Dome, Accra.*PROVOKING THE FINGER OF GOD#.ALWAYS WATCH HILL TV…PNG.” He wrote.