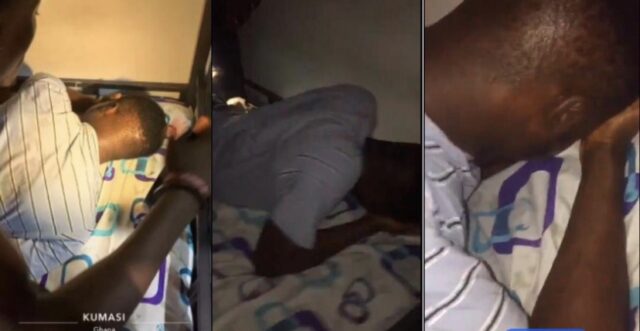 There is a viral video on social media which gives an account of a fresher of the Kwame Nkrumah University of Science and Technology (KNUST) who has been dumped by his girlfriend.

According to reports, this lady is one Bridget who has decided to end her relationship with this fresher and as a result, shattered his heart.

This fresher whose identity is still unknown is seen in the video crying his heart out as he buries his face in his bed.

Per the video, other roommates of the Conti Hall are seen singing and exclaiming the name “Bridget” as the move to this guy with an aim to either console him or make fun of the situation.

Many assert that he has spent a lot on this Briget girl who has eventually dumped him.

The stories of heartbreaks amongst the youth are very high and the depression that sometimes comes with it is quite alarming.