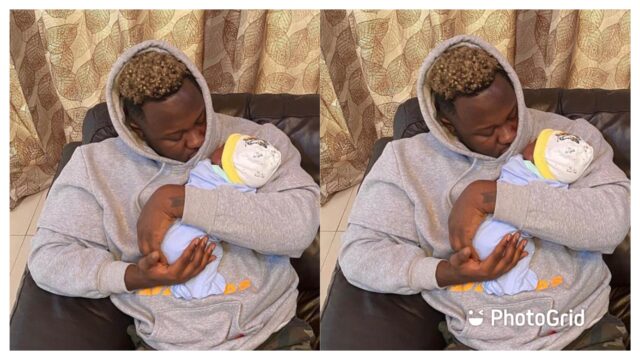 The real face of Medikal and Fella Makafui’s daughter, Island Frimpong, has finally been revealed in a new post made by Medikal on his Instagram.

Island who is some months old looks very cute and there’s no doubt she’s the daughter of Medikal, and in an adorable photo shared online by Medikal was seen looking stunning in all white.

It was indeed an adorable and memorable moment with Medikal and his daughter and will melt the hearts of many who will watch it.

Medikal and Fella Makafui has tried their possible best not to reveal the real face of their baby to the public, but it seems they kept it for a particular reason.

Medikal has been announcing his upcoming EP titled “AMAZING GRACE’ and to our surprise, his daughter is the face of the Cover Art for all the songs featured on the song.

The beautiful girl look all grown up in the photo which has captured her face, She looked so happy as her dad lifts her up.