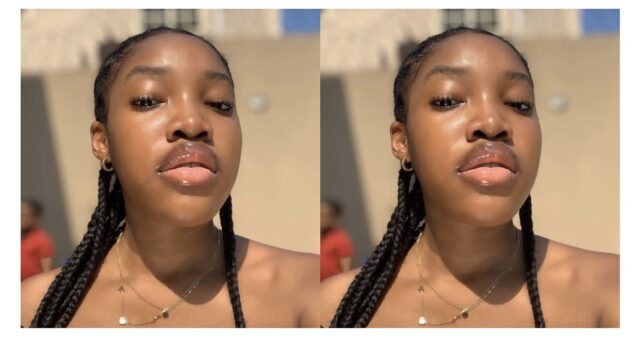 A university student here in Ghana who’s originated from Nigerian has warned broke guys to stay far away from her.

She made this opened during her interview with a Campus vlogger  under the topic “will you date a broke guy”.

In the video available on our Instagram page, the lady who mentioned her name as Nancy said she can’t trade herself body or date a guy who’s broke from the pocket.

According to her in the video, her facial alone comes with money and since she’s dating they are some basic stuffs she has to request from the guy.

ALSO READ Don’t blame him when he cûm quick because he would have last long if your road was good — Lady says (video).

She concluded that, of the guy is not able to provide to her what she need then has has no choice left than to cheat and cheating is not part of her so she will rather go in for rich guy instead of broke guy.

Don’t blame him when he cûm quick because he would have last long if your road was good — Lady says (video).

If She Is Broke And Jobless, Don’t Marry Her, Guys Deserve Better Too – Lady Advises Men