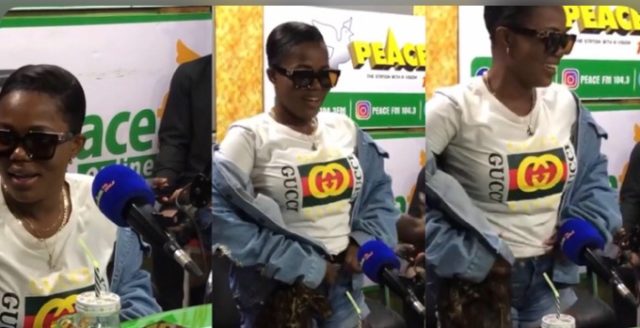 Radio presenter and musician Mzbel nearly went nakked during an interview on peace fm to show that her private part is not grey.

In her beef with Kumawood actress Tracey Boakye, it came out that Mzbel was an old woman and Mzbel herself was happy when she was interviewed on Onua Fm.

According to Mzbel on Onua Fm the only moment she respected Tracey Boakye was when Tracey said on her Instagram page that Mzbel is her mother.

But during her latest interview on peace Fm Mzbel refused to admit that she is an old woman.

To prove that she is not an old woman and moreover her private part is not gray she was pulling down her shorts.

One of the panelists said she should let them see if it is true that she doesn’t have grey hair around her private part.

At the moment she stood up to pull down her short they shouted and said it is ok.

ALSO READ Efia Odo Reveals She Is A Sun Worshipper

Mzbel almost showed her ‘3twe su’ hair during an interview on Peace Fm to prove that the hair on it isn’t grey
📹: @peacefmonline pic.twitter.com/ocTMEB7RJM