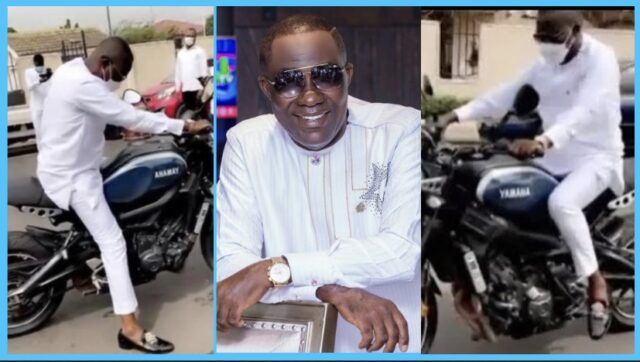 A video of the shocking moment the owner of Despite Media and many other companies, Dr. Osei Kwame Despite arrived at his 59th birthday party on a motorbike aka ‘Okada’ has surfaced online.

The video has so far generated a lot of reactions online because a lot of netizens could not fathom why a man as rich as Osei Kwame Despite, who has a lot of luxurious and vintage cars parked in his house will decide to ride a motorbike instead.

People who were specially invited to the party were equally shocked as many of them took out their phones to capture the moment that will be forever remembered.

Sharing the video online, Fadda Dickson captioned it “Man of many talents.

So far, a lot of videos from the party has gone viral on social media and already zionfelix.net has given you a lot of reports on them.

The video below is probably one of the few you have not seen yet. Check it out by just pressing play…