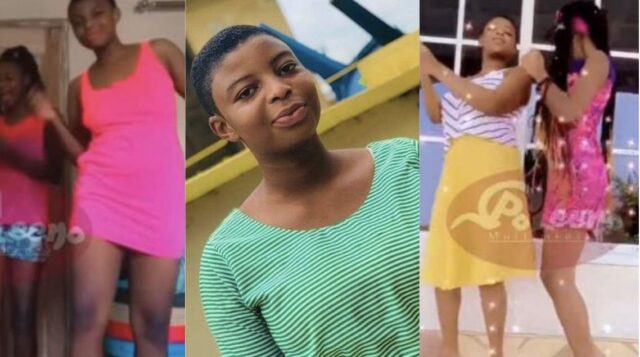 Last dance video of Leticia Kyere Pinaman, the final year student SHS girl Leticia was found hanging on the ceiling in the dining hall of the school has surfaced online.

ALSO READ She k1ll3d herself, we even saw toilet in her p@nts – Eyewitnesses F!rês Leticia’s Family (video)

It could be recalled that Browngh.com earlier reported about the death of a 14-year-old girl, Leticia Kyere Pinaman, who was a final year student of Miracle Senior High School in Sunyani.

According to reports, the dead body of Leticia Kyere was found hanging on the ceiling in the dining hall of the school with a suspected suicide note.

However, the mother of Leticia Kyere, speaking about the death of her daughter, revealed that her daughter was killed and hanged!

According to her, the body of her daughter at the hospital showed no signs that she died of hanging.

A few days after the sad incident, a video that sees Leticia dancing with her sisters has surfaced online.

The footage, which happens to be the last video, captures Leticia and her sisters having a fan.