The man of the moment, Black Sherif has shared a rare photo of his mother who he fictionalized in his Second Sermon song as Aunty Marie.

The new song which is a sequel to the First Sermon mentioned one Aunty Marie who has become his guardian angel after she passed on.

Apparently, the woman is actually her real mother but she’s not dead as portrayed in the song.

Sherif, real name Mohammed Ismail Serif took a screenshot of a recent video call he had with her and shared it online.

The rapper has risen astronomically in the mainstream after he burst out with his First Sermon single.

After he gained a rave review for his dexterity, he sustained the momentum with the release of Second Sermon which went viral within hours and making him a household name in the process. 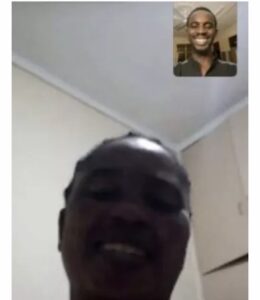