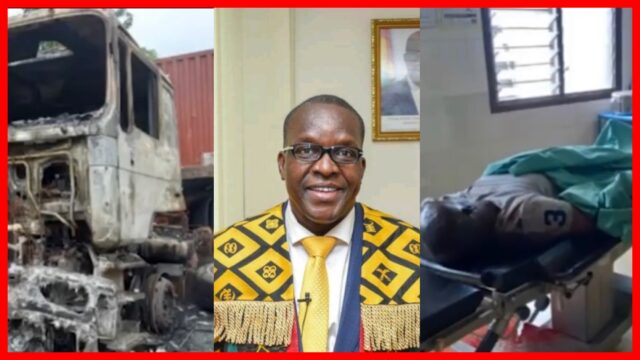 The speaker of parliament Alban Bagbin has involved in a serious a.ccident yesterday with his convoy.

The convoy of the Speaker of Parliament, Alban Bagbin, is reported to have been involved in an accident in the early hours of today at Juaso in the Ashanti Region.

The police escort accompanying the convoy, Chief Inspector Kaakyire Abednego, is said to have died in the process.

The Speaker of Parliament was on his way to Kumasi.

According to an eyewitness Papa Richie, who is with Ahenepa FM in Juaso, the accident occurred at exactly 9 AM. He said, “The dispatch rider who was clearing the way for the Speaker died in the accident which occurred at around 9 AM exactly in Juaso; before Juaso Junction in the Ashanti Region”.

ALSO READ A King At Gomoa Arręstęd For Rap¡ng His Brother’s Wife (video)
The police escort clashed with a Nissan saloon car after overtaking a tanker on the Atwedie-Juaso highway.

The body of the police escort is being transferred from the Juaso Government Hospital to Accra, Papa Richie further reported.