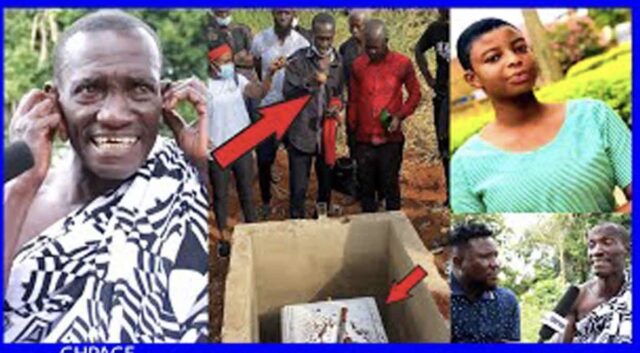 The AbusuaPaning of the Leticia’s (girl who committed suicide) family in an interview with Ghpage TV’s award-wining blogger Rashad says he still suspects a foul play in his granddaughter’s death.

According to him, he’s not fully convinced by the doctor’s reports that Leticia committed suicide but believes the Miracle headmistress killed the young girl and used her for money rituals.

The family head (Abusua Panin) who gave his name Alex Agyei Bonsu spoke to Ghpage TV after the burial of 17-year-old Leticia Kyere Pinaman that was held on Saturday 14th August 2021.

He continued that when the news reached the family that their beloved has died, himself together with some family members stormed the school to have a meeting with the school’s administration but the headmistress told them the case is beyond them as it’s now in the hands of the government.

Not satisfied by the reception given them by the school authorities, Mr Alex Bonsu aka Wofa Game revealed that the family went the extra mile to seek answers regarding Leticia’s sudden death.

The AbusauPanin further disclosed that the answers they went seeking from the spiritual world through a traditional priest suggested to them to do some rituals before burying their child.

During the burial, the family invoked the spirit of Leticia Kyere Pinaman to avenge her death by killing the suspected culprit behind her death.

At the funeral grounds, a matchet was placed in her coffin to serve as the weapon to use in dealing with her killer in the spiritual realm.

Additionally, the family invoked curses on the suspected killer of their daughter with Schnapps and eggs.