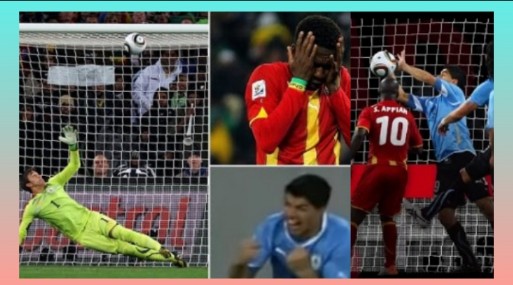 At South Africa, Uruguay were looking to qualify for the FIFA world cup semi final since 1970. They were up against Asamoah Gyan inspired ghana, arming to become the first African team to ever make the final four.

The Uruguay player Luis Suarez in the extra time split pepper into the eyes of ghanains after catching a ball which was to make Ghana qualify to the Final 4.

Asamoah Gyan who was then the Captain for the black stars hit the bar with the ball after the  referee declared penalty for Ghana.

After the end of the extra time of 2010 FIFA world cup between ghana and Uruguay, penalty shootout was called and Uruguay won that match which brought Ghana back home.