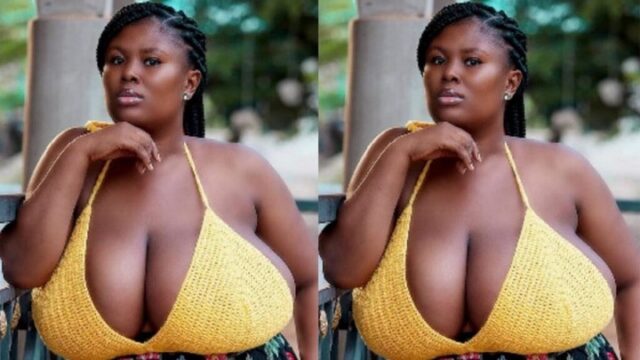 Young Ghanaian actress and video vixen who trended with her huge chest in the popular Okyeame Kwame’s #Yeeko challenge, Millicent Paticia Amoah, shares her life story in an interview on Peace FM.

According to Paticia Amoah her big chest nature we see today is all-natural and not an augmented one and in her family, she inherited it from her grandmother.

Paticia telling more about her teenage life, she indicated that when she was young, in the school, she faced body shames from her mates that even made her develop a distaste for school.

Again, Paticia said busty popular actors like Mercy Johnson and Mercy Asiedu gave her hope and motivation which compelled her to grow a thick skin to withstand her mates’ body shames.

According to Millicent Paticia Amoah she nearly even stopped attending church because her friends used to compose songs using her heavy chest.

In her acting, video vixen, photo model and other business, Paticia said she wants to still go far and not ready to stop now.